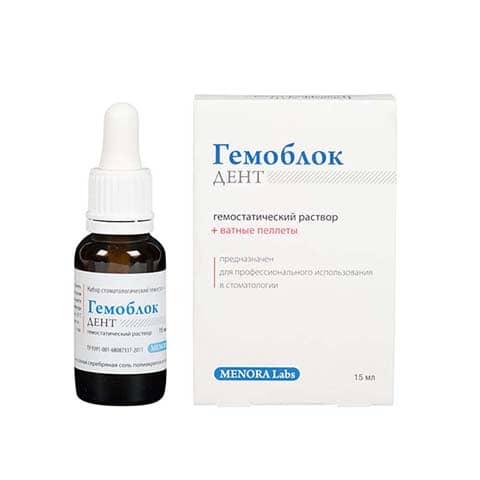 The main component of the material Haemoblock® DENT – incomplete silver salt of polyacrylic acid. Properties of the drug: local hemostatic, bactericidal and bacteriostatic, weak analgesic. The hemostatic effect is caused by the formation of an insoluble polymer complex on the surface of the wound. Silver nanoparticles have pronounced antimicrobial properties against most pathogenic microorganisms.

Haemoblock® DENT is non-toxic, does not show irritating, toxic, resorptive action, does not have a side effect on the tissues in contact with it. The solution does not require flushing. It has no age restrictions. The hemostatic effect is achieved quickly, there are no repeated bleeding.

The result of using “Hemoblock dent” on a bleeding wound is to stop capillary bleeding with the formation of a smooth elastic surface – a convenient field for further treatment.

Bleeding from the gums
Use a pipette to moisten the pellet and press it against the bleeding surface. Wait 1 to 2 minutes. Does not require additional flushing.

Apical bleeding
Carefully apply one or more drops of the solution into the cavity using a pipette or a cotton turunda (2-5 drops per application). Does not require additional flushing.

Retraction of the gums
Insert the retraction thread (not impregnated) into the groove. Then soak the thread with a few drops of solution. Leave the thread for 1-2 minutes, then the thread can be carefully removed, or left in the groove until the end of manipulation.